Pop! goes the pottery (in the tunes of Pop Goes the Weasel)

This semester I am teaching ceramics (or 'Hand building with Clay' as my school calls it).  For the most part things are going much more smoothly than first semester.

Here are some perks:
1) I know ceramics and LOVE it, therefore have been much more confident in what to teach.

2) I have more students and am in the building more, which means I have been interacting with more people (students and peers) and feel more a part of the school community.

3) I learned A LOT first semester and am trying put into practice some of the very helpful lessons.

The one BIG thing that has been a learning curve thus far has been using the kilns (ovens/furnace for clay) and firing (baking the clay to the point that it becomes hard) other people's work.  Clay is temperamental.  It is very important to give it the opportunity to dry out properly prior to and during the firing.

The first firing I did, the pieces were NOT as dry as they seemed when I put them in the kiln.  Also, I did not let them dry out as much as I should have prior to letting the kilns getting up to temperature (1900 degreesF).  This was disastrous.  Some might say FATAL for several pots, as they had major cracks or explosions occur in the kiln.  If one were to have been around when this happened, I'm sure they would have heard POP!!!

I felt horrible when I opened the kiln and saw shattered pieces :/

The upside?  I am now being super cautious.  I have been reading the manual and learning more.  I have asked several people for advice.  Results?  So far no more explosions.  Fingers crossed for expected results!!!

Posted by Unknown at 7:49 PM No comments:

Where practice and preparation meet

Today was an excellent day in the classroom.  On reflecting "Why?" I believe it comes down to the time I put into preparing and creating my own practice example.

We are beginning a new enameling project using the cloisonné technique.  It is fairly complex, and I have only created one of my own cloisonné pieces so far.  The piece I made in the workshop while learning was fairly small (a bit bigger than a half dollar).  The girls are working on 4"X6" pieces.  To say I am a bit intimidated by the scale of this project and steps involved would be an understatement.
HOWEVER, the supplies are bought (next time I will have them start with a smaller piece of copper) and the plan is set.  WE ARE DOING IT!!  Due to my lack of previous knowledge for this process, I have realized I MUST be in class and practicing at least 30 minutes early to feel fully prepared.  This gives me time to get together any supplies, practice own steps, etc.

After seeing how *calm the day was and how good I felt after class today, I may have to consider coming earlier from now on as a rule....  Hmmmmmm.

**Calm is relative considering they used jeweler saws to cut their copper.  There was constant scratching noise for an hour, with an audible SIGH when the last person stopped sawing for the day.  hehehehe- HS ladies with tools in the age of iPhones= HILARIOUS!!!

Stay tuned for pictures :D
Posted by Unknown at 12:54 PM No comments:

Grace to step out of place

I am grateful for my student's patience as I learn more and more about enameling and teaching. I have definitely had a bit of a learning curve this first quarter of teaching, and they have been very kind to me as I stumble over instructions and through new assignments.

Each time I start a new project, I try and think through the steps, take note of what may or may not work, and jot down what key points I need to emphasize, etc.

Sometimes as I am standing in front of them presenting the project I feel like I have two heads.  The more I talk, the more out of place I feel.  I think, "Why is it I am doing this again?"  Then, as they ask clarifying questions and start planning their next move, I realize at least one of my two heads was saying what I wanted because they are actually comprehending what I was saying.  Their projects are thoughtful and creative.  They take what I say and push it.  They pull from what they have been learning already and incorporate that into what I was hoping they would accomplish on the new task at hand.

Even when I feel like I COMPLETELY flopped the instructions, they seem to understand.  If not, they say, "Wait, WHAT??!!" and we try again.  Typically with laughing involved.  Overall, they do not seem to notice all the things that feel glaringly wrong.  I suppose I am STILL my worst critique.

Just as my students do, I must continue to give myself grace as I stumble over thoughts and words.  As I say something, realize it is not the best way to go about the project and must take it back.  As I learn while they learn.  As I continue to come to terms with the fact that even though I am the teacher, I am not an expert.  AND THAT IS OK.  Class is over.  Onto a new day :D
Posted by Unknown at 12:00 PM No comments:

A week ago, I spent Saturday learning a new enameling technique (more to come in a future post).

Immediately following was a whirl wind week!!  Project one finished by students, graded and turned back to them by me.  Grades posted online. Presenting the next project.  A pop quiz on color schemes (to help them think through their colors for the new project). Students beginning project two.  Me meeting with my mentor teacher for the first time (after forgetting to meet with her yesterday- OOPS).  And so on....

I now wait for my husband to come home so we can go camping!!!  HELLLOOOOOOO Fall :)  Of course this is the night he has to work late, so instead of brooding (too much), I will share some lovely work ;)

Here are some examples of the first project :D
These are 1"x2" copper pieces.  The project was used as an introduction to enameling and some of the techniques.  Enjoy, as they have done a wonderful job!!


I'd say we're off to a great start!!  Looking forward to seeing what they come up with next :D  Stay tuned...

Posted by Unknown at 4:17 PM No comments:

Growing up, we never bought school photos.  My mom took really good pictures and loved to print and share those with family, so there was really no need to have the somewhat cheesy posed ones.

There were some years I never even saw what mine looked like, since they didn't print them if you were not buying them.  Other years, I remember, they would send us home with a teaser- a few printed pictures that you either bought or brought back to the school (what a waste).  I'm sure that tactic worked for some people, but not for my mom!

This year, for the first time in my memory, I have copies of the school picture taken.  Since I'm a teacher they gave me some for free!  The best of both worlds :D  Yesterday afternoon I enjoyed writing love letters to some people in my life.  I included in them these silly little trinkets.  Thanks school pictures for inspiring some much needed love to be sent around!!!

The one I am ESPECIALLY proud of is pictured below.  My friend Jane is one of the few people my age who I know consistently sends mail through USPS.  She typically makes her own envelopes out of lovely magazine photos.  She's even been known to make strange things in postcards.......... Naturally, I followed her lead.  This one's for you Jane ;) 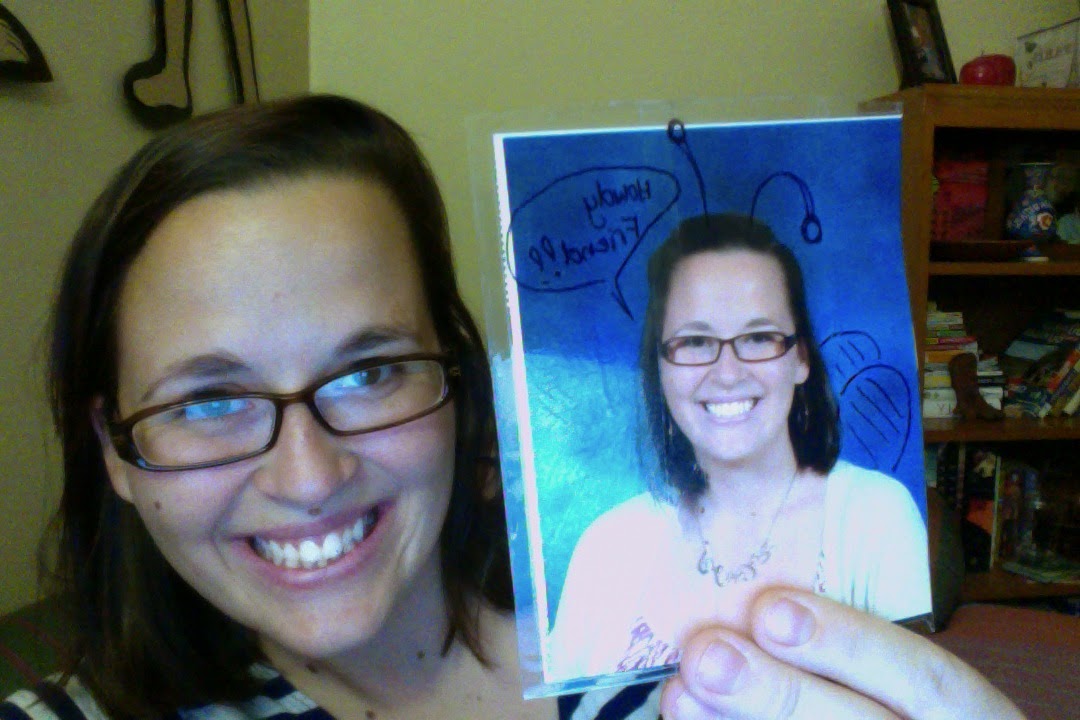 Posted by Unknown at 6:49 AM No comments:

We are already halfway through our third week of school!!!  My students have really been working hard and getting a lot accomplished.  Soon I will post some samples of their work.

Today I gave another demo on an enameling technique I learned over the summer called wet packing, or wet inlay.  They were all very excited to see another way to manipulate the enamels.  They ask great questions, and overall seem to catch on the first time something is explained.  It's great!!  (I think I am getting spoiled)

Good questions they have asked to me today (and answers I found):

1) Why is there a little pit in the color here if I put the coat on evenly?
- used too much holding agent
- the enamel was on too think
- a gas released from the metal underneath during the firing

2) Why is there black on here that was not before?
- fire scale is popping off the trivets or firing racks during firing (clean with pickling or file)
- If red/orange, many of them react with copper and turn black (put down a thin base coat first)

Something I have been wondering and noticing... Should the surface of the piece always be completely covered the first time it is fired?  For example, of I am using stencils, should I put a thin layer of flux or white on first as my 'primer' and then proceed with the colors on top?? OOOR, should I do part of the stencil, fire it, do the other part and then fire it again?

Students have been doing it both ways.  It seems if they have a base coat, it ends up pretty thick at the end of things.  If they don't though, fire scale flies up off of their piece and lands in the colors.  Also, a black edge os formed and they sometimes do not like that.

I suppose, without asking someone with more expertise than me, I should have them put a thin coat of something on first.  More research will be done.....

Above is a link to Object by modology's facebook page.  They have some really funky treasures inside.  Some original furniture and art pieces mixed with some vintage furniture and home goods.

I was introduced to Object during the CSArts Cincinnati adventure.  One of the shareholders, who really enjoyed the sleek modern feel of the white stippled piece she received, told the guys at Object about my work.  At the next party they came together to ask if I would like to sell my work in the shop.  YES!  Of course I do, thank you for seeking me out :) 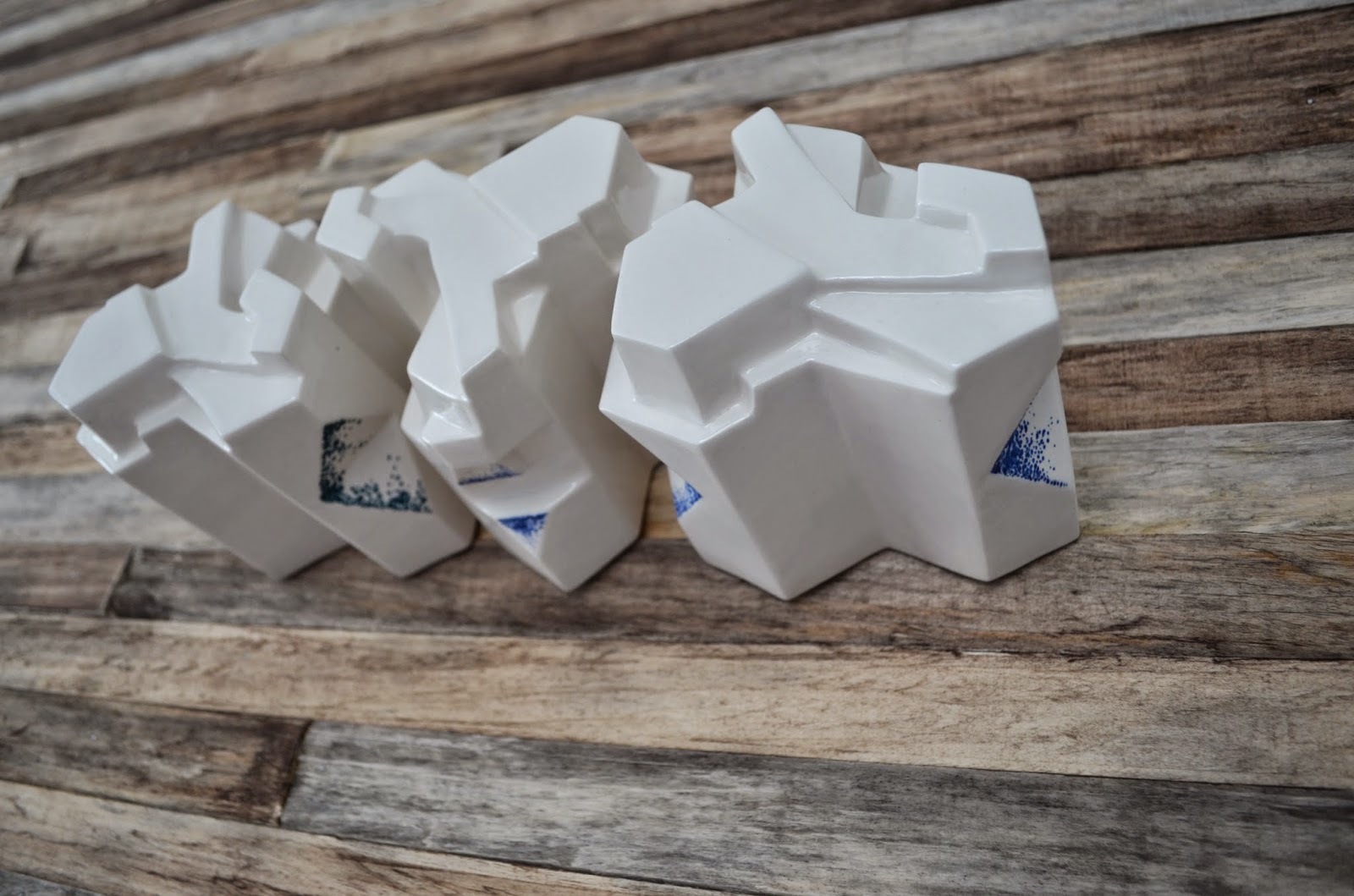 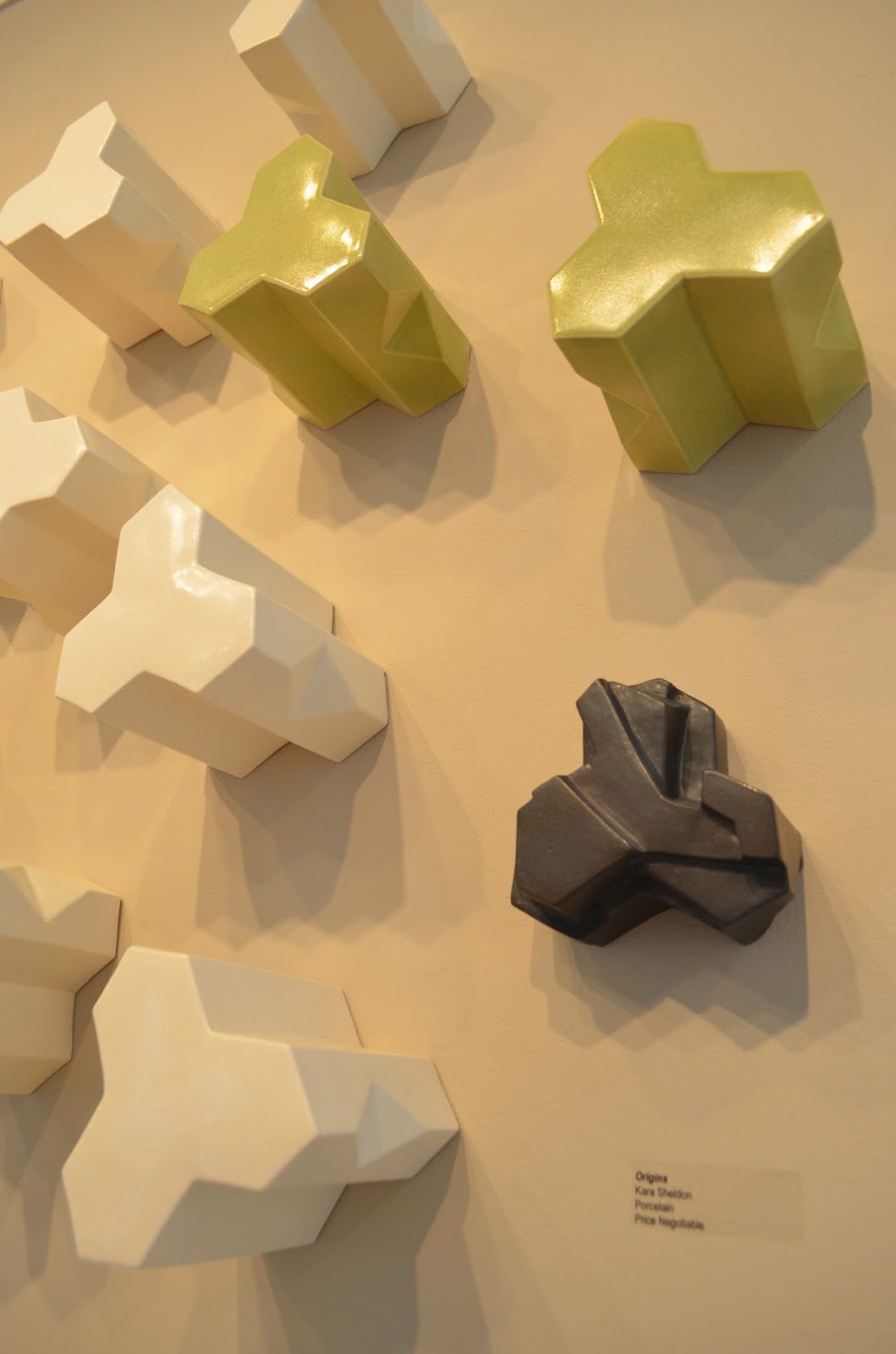 I put several of my slip-cast pieces in Object this past Saturday (the white and green ones pictured to the right).  Now to wait and see how they are received by the purchasing public :D  Fingers crossed!!!

Thanks Rachel and Andrey for this opportunity!